Aluminium - "Winged" metal has become widespread not only in the air, but also on the water - aluminum alloys have become one of the main materials for the production of ship hulls after wood and steel, and even after the invention of fiberglass hold a strong position.

The main advantages of aluminum boats are that their hulls are light, strong, relatively durable, almost do not require care and are very resistant to the curvation of the surface layer when in contact with sand, ice or stones. Moreover, the marine aluminum alloy is resistant to corrosion and does not require painting. On the other hand, the boats of this material have certain drawbacks such as the worst repairability and hydrodynamics of the hull compared to fiberglass, as well as noise and high thermal conductivity.

In Lithuania and Scandinavia, aluminium boats are very popular because of tradition, and modern trends in shipbuilding involve combining aluminum hulls with plastic decks to reduce the weight of the vessel and improve its design.

One of the most elusive superyachts in the world, Yas stirred the imagination of many people on the day when the water first touched in 2011. The one-of-a-kind exterior made a stunning impression. But the day when the audacious idea of the current owner Yas was finally implemented, preceded by a bright backstory.

It all started in 1981, when the 130-metre frigate HNLMS Piet Hein (F811) was launched at the Koninklijke Schelde shipyard in the Dutch city of F8811. The vessel, capable of accelerating to 34 knots, was in service with the Royal Navy for two decades, covered countless nautical miles and participated in several international operations in the Americas, as well as in the Caribbean, Mediterranean and North Seas.

The frigate then changed its owner for the first time and joined the UAE army in 1998. There it was called Al Emarat (F 02). Under this name he was a member of the fleet of the United Arab Emirates until 2006. At that time, he participated in manoeuvres in Bahrain and Oman and was one of the courts of the Gulf Cooperation Council at the time of Kuwait's independence.

Inside, in the bow of the upper deck, are the owner's impressive apartments, hidden under a giant glass dome that creates breathtaking 220-degree panoramic views. The space is completely open from floor to ceiling. 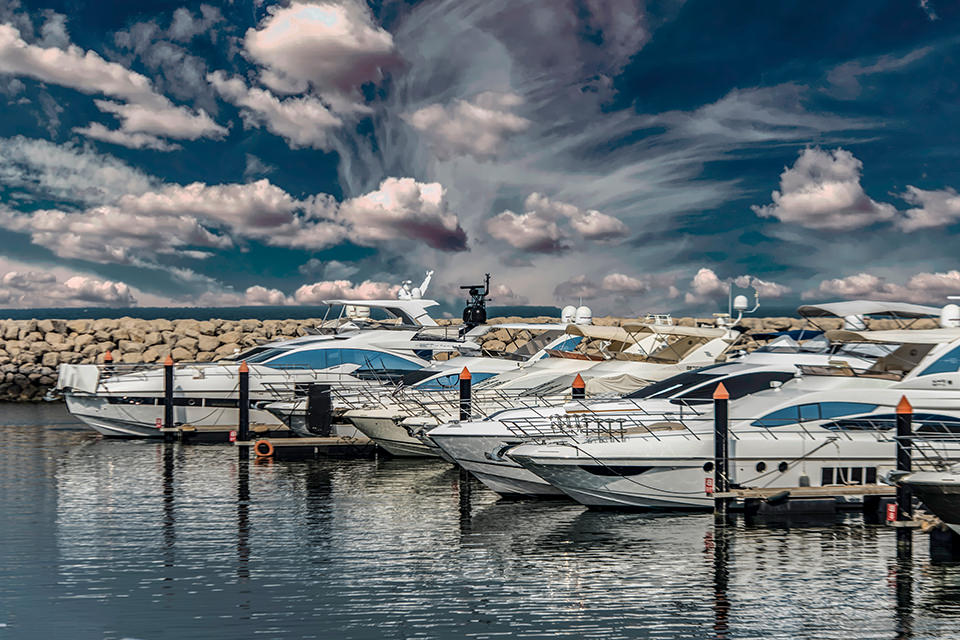 A solution was found. Inside the cabin, with the help of a soft rolling curtain, the owner can now highlight the space hidden from other people's eyes, thereby ensuring the necessary level of privacy.

A characteristic feature of Yas, which does not have any other superyacht, is the ability to accommodate up to 60 guests overnight. Conventional marine classifiers in the larger yacht segment would not allow a vessel of this size to take on board so many passengers, but with the new rules approved by the owner of Yas, boats of this type can now be built in Abu Dhabi in accordance with this special regulation. In addition to guests on Yas, up to 69 people, who make up the team and maintenance staff, can live at full load.

She's like your baby. You look out the window and you see him playing in the garden. It's a very emotional moment. And then the child leaves the garden, goes beyond it. Yas is Yas, I'm always very impressed when I see her. Now I am happy with the happiness of its owner," pierzhan says.

The creators of Yas are proud of their brainchild. And hardly anyone will turn the tongue to say that they have no right to do so. After all, they managed to implement the project, which many at the stage of development seemed impossible and insane.